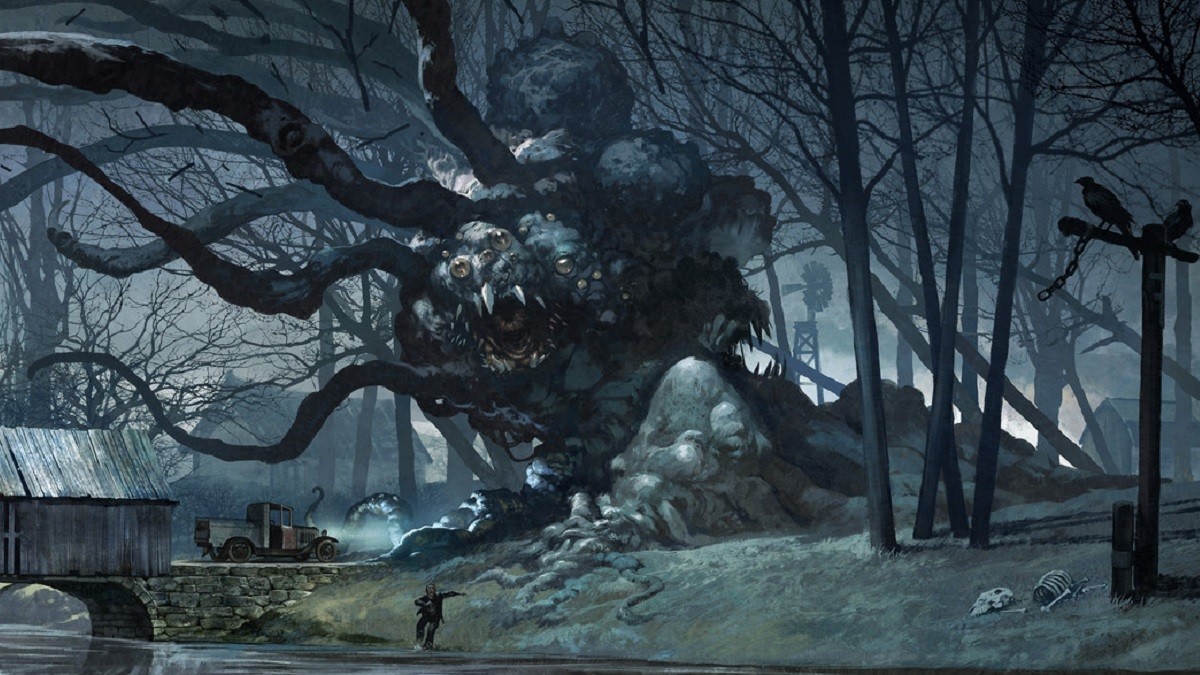 "It was—well, it was mostly a kind of force that doesn’t belong in our part of space; a kind of force that acts and grows and shapes itself by other laws than those of our sort of Nature. We have no business calling in such things from outside, and only very wicked people and very wicked cults ever try to. There was some of it in Wilbur Whateley himself—enough to make a devil and a precocious monster of him, and to make his passing out a pretty terrible sight. I’m going to burn his accursed diary, and if you men are wise you’ll dynamite that altar-stone up there, and pull down all the rings of standing stones on the other hills. Things like that brought down the beings those Whateleys were so fond of—the beings they were going to let in tangibly to wipe out the human race and drag the earth off to some nameless place for some nameless purpose."

Dr. Henry Armitage pours himself a glass of pinot and sits down at his desk, gesturing for you to sit across from him. “I apologize for the short notice,” he begins. His face is pale, his forehead sweaty and wrinkled with worry. 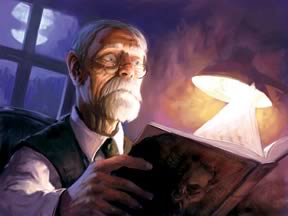 Armitage—the head librarian of Miskatonic University, and a former mentor of yours—privately contacted you in the hopes of gaining your assistance. Eager to help, you made your way to his home in Southside. Upon entering, you were surprised to find his home in disarray. Books and notes litter his desk, and an empty bottle of wine has tipped over onto the ground by the fireplace. You’d always known Armitage to be neat and well-organized.

The elderly man takes a moment to collect his thoughts.

“I am looking for two of my colleagues—Dr. Francis Morgan, professor of archaeology, and Warren Rice, professor of languages. Warren was supposed to meet up with me over supper earlier today to discuss several important findings, but he has since gone missing. At first I thought nothing of it, but I have a nagging feeling something else is going on. A
very…familiar feeling.”

You’ve never seen Armitage quite this worried before. His hands tremble as he reaches for the glass on his desk, and he sips from it nervously.

“I tried to find Francis, hoping he knew where Warren was, but he too is out of touch. Francis has been spending a lot of time in some gambling den, or so I am told."

“I sent for you because I am worried Warren might be in trouble. I would appreciate it greatly if you could find him for me. You may also wish to ask Francis for help, if you can reach him.”

Finding the club’s exact location wasn't easy—Skids had to grease a few palms just to learn which of the Downtown restaurants operates as the club’s front. That restaurant is La Bella Luna, a somewhat upscale Italian eatery by the theatre.

The investigators changed into their Sunday best and made their way there, well except for Wendy who doesn't exactly own much in the way of fancy threads. 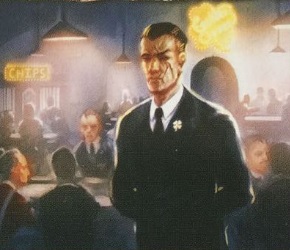 In front of La Bella Luna stood a man in a pinstripe suit who sizesd everyone up as they approached.

“Enjoy yourselves,” he said with a snake-like grin as he held open the restaurant’s front door.

Wendy hung about outside to keep an eye out for any goons who may stir up trouble and to snoop around and dig up any dirt. (gathering all three clues)

Skids and Agnes slipped into the Clover club, both heading to the gaming tables under the steely eyes gaze of the Pit Boss, Skids won big on the first few games with Agnes breaking even, (both gained clues) the Pit Boss drifted over to the tables to keep a closer eye on things, Skids and Agnes knew the game was up and drifted of towards the bar.

Meanwhile outside Wendy had spotted a few of the O'Bannon gang turning up and eating at La Bella Luna, things looked like they might get interesting, Wendy slipped into the Clover club via an open restroom window to warn the others.

In the bar Agnes mixed with the locals and ordered a few drinks, while Skids tried to find VIP area, Wendy was drifting through the club and dodging the Pitt Boss and some of O'Bannons goons who now entered the club.

After several runs in with the goons Skids got back into the games room while Agnes was definitely feeling the effects of the drinks she had, surely these must have been spiked by the slimey looking barman who was grinning like a cheshire cat, Wendy managed to get her attention and they headed of search of Skids, dodging the thugs who now seemed to be filling up the club they finally managed to track him down again at the poker tables, Wendy spotted a a dark oak door behind the drapes and the group headed towards it, Skids felled one of O'Bannons thugs who tried to stop them from entering the private areas with a well timed sucker punch and they slipped into the darkened hallway beyond.

The dark corridor held three doors, deciding to split up and try to find Dr. Morgan as fast as possible they all headed for a door each, Wendy managed to have find the back exit to the club, agnes found some sort of gallery filled to the rafters with i'll gotten goods, meanwhile Skid's hit the jackpot finding Dr. Morgan gambling the VIP rooms...but he appeared to be playing cards with two unconscious bodies, his pupils dilated as though in a trance. He couldn't seem to stop laughing, smiling, and chatting with the other “players.”

Outside in the back alley Wendy nosed about much to her horror she found the rotting remains of an ex patron of the club stuffed into a trash can, not liking to be left alone outside she stumbled back into the club straight into the Pit Boss, at this exact moment Wendy heard a crash from somewhere upstairs and screams of pain in the lounge.

A terrible monstrosity had smashed it's way through the entrance to the club, crushing the stairwell and knocking over gangsters and patrons alike and sounded like it was heading towards the VIP area, Wendy seizing the initiative gave the pit boss a swift knee to the nether regions and and fled  into the VIP room.

Skids and Agens had failed to wake Dr. Morgan from his delusion nothing seemed to be working even a slap across the face didn't have any effect.

"Something terrible is going to happen if we don't get the hell out of here" Wendy screamed at the other two will holding the door shut.

"Can't you do something?" Skids asked as the screaming outside seemed to be getting closer.

The whole building seemed to shudder to it's very foundations plaster and dust fell from the ceiling, more screams and beastial roras echoed from the hall outside.

Agnes tried to think through the haze brought on by the spiked drinks, a plan was forming "Once he's back with us run for the back entrance and into the alley" she blurted out.

Skids and Wendy looked confused but were ready, Agnes grabbed the edge of the card table and with the strength that comes from desperation she tossed the heavy set table over onto it's side, scattering cards and chips across the floor.

“What in the world…?” Dr. Morgan finally broke out of his daze, Agnes grabbed his arm dragging him from his seat and rushing to the door, Skids flung it open and they barreled out into the dark hallway followed by Wendy.

The lights flickered and dust hung in the air, they all headed towards the back door looking to get to safety.

Wendy was roughly grabbed by the collar, years of living on the streets had given her reactions like a cat and she twisted round slipping out of her assailants grasp and spinning round to see the Pit Boss standing in the darkness.

Agnes and Skids barreled through the back door into the night, but Wendy still in the club stood transfixed, something didn't look quite right with the Pit Boss, the lights flickered on for a brief moment illuminating the scene and burning into her mind an image that she will never forget, the pit Boss opened his mouth as if to speak but only a bloody gurgle issued forth, behind him was a monstrous impersonation of a human, deformed and boney growths and and tumorous muscles, it flung the Pit boss to the floor revealing the huge gashes down his back that its wickedly long claws had caused, .

It lunged towards Wendy but she was quicker leaping aside and out of it's murderous grasp she bolted for the door, faster than the time she stole food from Old Man Martelli's store and he released the dog on her she made the door and out into the cool night air.

The group fled the area and took a breather on the embankment next to the river.

“It’s all a haze,” Dr. Morgan he explained, visibly exhausted. “I was having the run of my life! Perhaps I had one too many shots. But, those creatures—I haven’t seen anything like that since…”

He trailed off, his mind is racing. His eyes widened with realization and his face paled.

“I may not be in the best shape, but I’ll help with your investigation. Whatever it takes.”

The three investigators along with Dr. Morgan disappeared into the night heading towards the Miskatonic University.